If you think “powdered” food means a pale imitation of real flavours, you haven’t tasted the products of Sato Foods industries. But if you’ve ever been to Japan, you almost surely have.

The headquarters of Sato Foods Industries Co. Ltd. outside Nagoya in central Japan are located in a typical Japanese industrial area: building after similar building stretching across an uninteresting, flat expanse of reclaimed land – but at least everything is uniformly neat and tidy (this being Japan, of course).

The soft fronds of palm trees surrounding the entrance, however, suggest that things might be a little different in the headquarters. It’s a first impression borne out by the cordial Irrashaimase! – “Welcome!” – from every employee, and the pots of orchids and other flowers at the exit from the lift on each floor.

“Raising my tropical flowers and talking with the young people –that’s what I like best of all,” says Sato Foods Chairman Jinichi Sato with a smile, settling back into a meeting-room sofa. At 79, the Chairman is still very much involved in the running of the company he founded in 1954, and fiercely proud of the technologies he either initially created, or set the path for later development by his research team.

“Almost everyone in the country has eaten or drunk what we make, ” Mr. Sato says. The company is one of Japan’s leading producers of powdered extracts – black and green teas, seasonings, soup bases, soy sauce, and, perhaps its most unusual creation, powdered alcohol products.

Almost everything is sold in bulk to other food manufacturers or retailers, “So very few consumers actually know our name, “Mr. Sato says. “We have always tried to create something that tastes better than what the average person can make,” he explains. “For example, ocha – green tea – is hard to make well from leaf. You have to warm the pot, add hot water, and the taste changes very quickly depending on the temperature and water quantity. Powder is convenient, compact, it’s stable and the flavour doesn’t change.”

Servings of tea regularly supplied during the interview by the smiling staff are just what Mr. Sato says: consistent in flavour from cup to cup, and without the bitterness often found in the quickly-made cups inevitably served to guests in offices and homes. But Mr. Sato is aiming even higher. “Powder has the image of being inferior, but I want to create high-quality products that have true, natural flavour. I want to bring it to the level where it tastes as good as something created by a professional.”

The same every time

Exactly how Sato Foods has succeeded in capturing natural flavours in powdered form is closely guarded technology. Eight spray towers stand at the company’s two plants in the area and Mr Sato describes the process in simple terms. Liquid materials are sprayed from the top of the towers at carefully-controlled temperatures and airflow that turn the fine mist into powder in just a fraction of a second. There are viewing ports on the sides of the towers, but after some discussion it is decided that even the glimpse these allow is best not shared with outsiders. 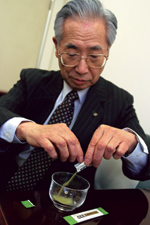 “Each of the eight drying towers is different.” Mr. Sato acknowledges. “We tell the construction people what we want done inside – add a duct here, put some pipes over there. It takes hundreds of tries and hours of research to find the best way to dry something. Any tiny change in any of many factors – the heat, the cooling air, the shape of the nozzles – will have an effect on the results. This is why we are increasingly dependent on automation to ensure that everything is exactly the same every time.”

Because of this insistence on quality, Sato Foods Industries is the leading producer of powered ocha in the country. Its No. 2 Factory, completed in 2000, was built solely for the production of powdered teas, in particular ocha. “There are just a few others trying to do this, but they have almost all met with failure,” Mr. Sato says with more than a touch of pride.

A visit to the factory, about a 20-minute drive from the headquarters, shows the automation which ensures that the tea produced tastes the same all day and every day. Only about a dozen workers, in near clean-room conditions are required to oversee everything from the making of the base tea itself to the spray drying, gathering of the powder and packaging for shipment.

Unlike most Japanese manufacturers, Sato Foods Industries uses its own engineers when constructing new facilities. “This means that we don’t just set a budget and schedule and then turn everything over to the contractors,” says Akifumi Yoshimatsu, Managing Director and the man responsible for technical decisions. “Instead, we very carefully select what equipment we want used, and how things are to be built.

We wanted world class quality in everything, and this is one reason why we insisted on Alfa Laval valves, heat exchangers and clarifiers (sparklingly clear tea being, of course, a necessity). We also are involved in more and more international business and wanted the factory to demonstrate our readiness.”

The fun of it

“Products like Alfa Laval’s are our weapons,” adds Mr. Sato. “We need the best.” Another sign of this focus quality is the strict adherence at the plant to the HACCP (Hazard Analysis Critical Control Points) system originally developed by NASA in the US to ensure the safety of food for astronauts.

While ocha is about half of the business today, in fact it was in humble soy sauce where the company began. “I studied ceramics at university,” Mr. Sato says, but like everyone after the war I was hungry! So I went into the food business.” After a short stint as a researcher, Mr. Sato began what he calls “fun” research into a clear soy sauce that, after much trial and error and some disappointments, was eagerly accepted by cracker makers in Tokyo. A later request by a customer for a dried soy sauce lead to the field where he would be even more successful. “They though I was this bright scientist from Kyoto University, but I hadn’t even seen a drier!” he recalls.

The challenge of the task lured him on, first to success in food flavourings, then in the 1960s to a true world’s first: powdered alcohol. “It was the fun of doing it that kept me going,” he says. He found a combination of a sugar with alcohol resulted in a powder that somehow holds onto the alcohol during drying while the water is removed.

To illustrate the point, a member of staff brings in a series of beakers containing a fine grey-white powder. The Chairman takes the helm, mixing the powders about half and half with water. “Red wine!” he beams. “Brandy!” And, in fact, they are entirely drinkable – and fully alcoholic – beverages. “It’s not a big product for us,” Mr. Sato admits, “but cake makers and others find it a great way to get natural alcohol flavours without needing the storage space for liquid.”

At an age where most people have long since retired, Mr. Sato’s thoughts are very much with the challenges of the future. “I see things like powdered salad dressing that you can just sprinkle on,” he says. “I want to make a top-quality soy sauce so you can sprinkle it on sushi, instead of dipping into liquid. We just have to study more. It’s interesting, because it’s difficult!”

With this spirit of enjoyable inquiry firmly established at the company, it will be interesting to see in the future what kinds of delicious powders do emerge from those secret spray towers.

To achieve what Sato Foods Industries’ founder and Chairman Jinichi Sato calls the ideal mix of “technology and art” that results in delicious products and good business results, his company has applied both human skills and world-class equipment in building their new Number 2 Factory in 2000.

The people power came from the company’s 20 R & D staff who figure out the ideal factors to make foods taste and look good after being transformed into powder and later reconstituted with water.

The equipment includes a number of key products from Alfa Laval, of which the plate heat exchangers and the clarifier are supplied through Tetra Pak. The equipment provides precise control of temperature and other factors to ensure the same top level of quality all day and every day.

Before the concentration stage, a VNPX clarifier is used to remove solids from the liquid. This is a critical step in ensuring that exactly the right, small amount of solids is kept in the product in order to create the impression of fresh ‘home-made’ tea.

Finally, to move the liquids through the various processes on the way to the transformation in the highly-confidential drying towers, Sato Foods has installed a number of Alfa Laval SRC remotely-controlled valves and other sanitary valves for precise, optimum product flow.

“Our Key Account Management concept is critical for customers such as Sato Foods,” says Atsushi Sekigawa, Sales Manager for Sanitary Equipment at Alfa Laval in Tokyo. “This allows us to provide full support to the customer in a single approach.” 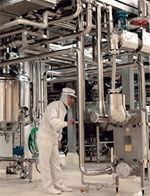